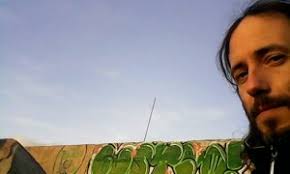 Marc is my name. Flove.org is my life-long project.

I am 40+ years old, half of them lived around the east side of the Iberic Peninsula, but i am very nomad mostly around Iberia overall.

MY FAR PAST (Boring…)

I have always been quite curious and enthusiastic with what was from my interest. When i started reading (around 13 years old, off from school), I directly got obsesed with that. Same happened a bit after that when i started writing my first poems and rants.

I was good at english, and already traveled a lot, and so before got into 20, i moved to a big city, also in another country, both things i never experienced before.

After some time there not really committed to the intelectual activism i was into before that, i felt a need of getting back into it, but in a more strong or definitive way. That was a kind of insurrection for me, and as all my previous activism, i was minimizing the confrontation the most, but this time even much more.

That time, around 2003, my main antithesistic point of departure was money in general and centralized money in particular. And my self proposed development was a free software website which soon become a wiki about Barter and Alternative currencies, while i was also actively contributing in another communitty about Free software in Catalonia.

Bitcoin came in a couple of years later, just when i was tired of barter and was rather completely obsesed with Sharingness instead. On the top of that, i was already (messily) keeping too many admin passwords so i didn’t accept gifted bitcoins from hackmates… lol.

With sharity i found myself really obsessed with conceptual estructures. Taxonomies in diagrams, interactive mockups and wiki categories were starting to really taking most of time. Sharity (shareful i call it) substituted barter, shareful docs were growing and made me moved to various domains and broader scopes (see this post for more about this tripping), up to i found the calm of flove(s) in 2012, which is for me the broadest possible scope, the development arena that i won’t be able to fork it further anymore. I mean, now i call to my main life purpose and obsession «to have time and energy for commiting to working sessions on (extending andor simplifying) parts of Flove (lol)».

I am quite informal overall, but i am very strict with taxonomies and axioms. This makes me very sharp and smooth at the more fundamental issues at whichever field of knowledge.

BICTIOPEDIA SPINOFF SAVED ME MUCH (Boring…)

Andbut in the other (tragic) side of things, i am very lazy at following (over…)formalities, so I don’t have much precise achademical background in all fields i theorize about. So i «had to» develop the Bictiopedia standard and project on its own, for more easily promoting others to keep digging where i would love too but i sincerely could not (cos not enough time and energy to hold that much more..). It’s hard for me to focus in less fields because i am very easily finding gifts that would take much longer time to anyone else to do so. I feel to satisfy such despaired opportunities for myself by beautying Bictiopedia for others to have a very good door for rather getting themselves in where i could very easily be myself in, but have to refrain, for more properly focusing better in a more reduced list of fields i want more to really digg in further myself with my limited time of life…

I am also poor overall (in simple living basis) for saving time for evolving parts of the project i can myself alone, but i am neither able of handling much more of code, graphic design or marketing… which could make the project more straight-through (everytime more easily and deep as i go doing other tasks myself)

I DON’T UNDERSTAND THIS WELL ENOUGH

Also, despite being a quite outgoing guy, i am not good enough at engaging helpers or getting resources for developing this project further or quicker (many people complain about me being too cryptical, complicated or savage-harsh with some of my written communications).

Finally, both the actual sites (flove.org and bictiopedia.org) are just a slightly greyish paper (lol). So bring your arts on board if you want a more colourful flove.